Estonia is one of the three Baltic countries, together with Latvia and Lithuania. Estonia is well known for having introduced a government system based on internal e-Residency: e-voting, e-taxing. Recently Estonia established e-Residency for all nationalities: a digital identity with the possibility of running a company online from anywhere in the world. So one would expect that online funding would be booming. But not in the beginning. Henri Laupmaa, the founder of Hooandja (www.hooandja.ee), first tested his idea for a crowdfunding platform on his friends 5 years ago, and most of them thought that Estonians were too reserved to put their backing of a project online. There was no word for crowdfunding yet in the Estonian language. He started with Hooandja in 2012 anyway, as a donation/reward based crowdfunding site for the creative sector. In 2015 he founded a second crowdfunding platform, now for equity crowdfunding: Fundwise (www.fundwise.me), because some of the companies which first raised money on Hooandja now needed more investment funding

Kickstarter is one of the first reward-based crowdfunding platforms launched in the US in early 2009. Since then it has created a global community built around creativity and creative projects. Over 10 million people have backed a Kickstarter project, raising a total of $ 2.9 billion for 121,778 projects.

However this global expansion has not been straight forward. Today Kickstarter is present in 14 European countries: the United Kingdom, Denmark, Ireland, Norway, Sweden, the Netherlands, Germany, France, Spain, Italy, Austria, Belgium, Switzerland, and Luxembourg. European creatives based in countries where Kickstarter is not officially operating, can still launch projects if they have a collaborator or subsidiary in one of the countries where Kickstarter is officially operating. Such restriction does not apply to backers, and currently anyone in the world can back a project on Kickstarter in return for a reward, allowing creatives to appeal to an international backer’s environment.

Art Basel Crowdfunding Initiative was launched in partnership with the US platform Kickstarter in order to catalyse much needed support for outstanding non-commercial art projects.

Project creators from non-commercial arts organisation worldwide prepare crowdfunding campaigns – in line with the admission criteria of Kickstarter – and submit the application to Art Basel to be included in the Art Basel curated page on Kickstarter. If the Art Basel jury takes a positive decision, the project is promoted by Art Basel on Art Basel’s curated page, during art fairs (e. g. the crowdfunding lab) and other media channels (articles, social media). 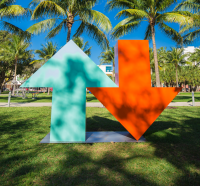